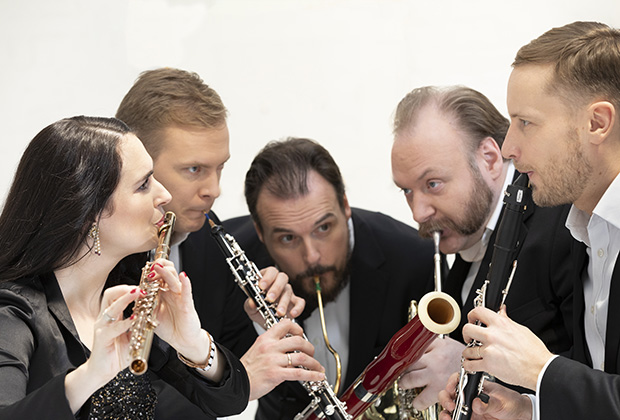 Carion’s fresh approach to chamber music has brought acclaimed performances in Europe’s most prestigious festivals, like Rheingau Festival, Kissinger Sommer, Beethovenfest Bonn, Bergen Festival and Louisiana Festival, as well as in the Far East. Carion has released five highly critically acclaimed CDs – including stellar reviews from Gramophone and BBC Magazine, awards from Danish radio, and best classical album of 2015 on iTunes. But nothing compares to their trend-setting music videos on YouTube that continue generating views totaling close to a million. The Ligeti performance alone has over 300,000.

The near future will bring a new recording featuring works by Mozart and Hindemith as well as most notable performances such as at Zürich Tonhalle (Switzerland), and continued work on expanding the woodwind genre.

A major project in 2019 will be a commissioned work with the theme 30 years of Baltic Way by three Nordic composers (Britt Bystrom, Anders Nordentoft and Andris Dzenītis) in cooperation with German dramaturg Jochen Sandig. Together the artists will create a completely new type of concerto and unique performance for Carion with symphony orchestra.

Carion presents a varied and interesting repertoire. The ensemble is well versed in the established wind quintet works, but has received most favorable critical attention for their interpretations of Carl Nielsen, French composers like Jean Françaix, and especially the Six Bagatelles by György Ligeti. Carion has worked with several contemporary composers, most notably with Morten Skovgård Danielsen, and can also present a unique range of arrangements by their own horn player, David M.A.P. Palmquist.

No tickets are available for this event.